Typewriters of 2022: an overview

In the end of 2021, I owned 3 typewriters. I was more into wristwatches than typewriters at the time. This year, however, I didn't buy any wrist watches, as I am still happy with the Seiko Marinemaster SBDX017 I've bought in 2018 and has been my daily watch ever since. Only during a few weeks this year I've changed to my vintage Seiko 6138-8030 (JPS) and the Pulsar LED Calculator, which surprisingly became alive again, after I discovered I put the batteries upside down.
The only watch I really want (but didn't buy) is a vintage Rolex Day Date 18078, with bark finish. There are two problems; one is the price, and the other problem is that I don't think I would dare to wear it. I don't have the right amount of mafia vibe around me and I would only worry to damage it. 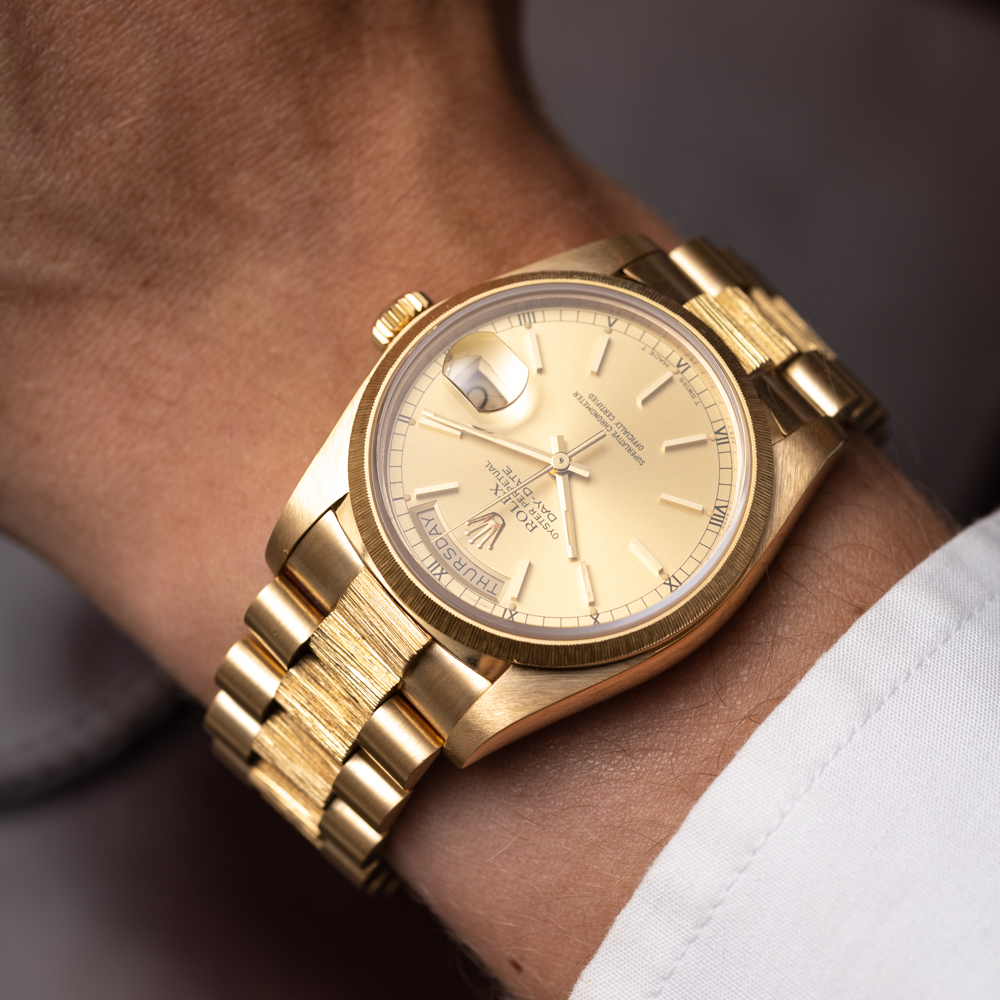 So, what did I do this year regarding typewriters? As I wrote, starting 2022 I owned 3 antique typewriters: I already had my very early Hammond 2 (Dutch delivered), the earliest Remington Portable 1 (NC00062) and a gold plated Princess Praesent. During the year, I sold the gold Princess, and bought 11 different typewriters instead. Let's see, dear imaginary readers, what I bought and sold last year.
Perfected Type Writer No. 2 and Caligraph 2
Let's go through them chronologically. In March, I went to Köln (Germany) to the Breker Auction, where the typewriter collection of Jim Rauen was auctioned. I managed to pick up a Perfected Typewriter No. 2. Quite a score, and last month I dedicated a blogpost about it. This was the typewriter that gave me most fun researching, because so little is known about this successor to the Sholes and Glidden. Michael Adler called it "a connoisseurs instrument" in his book. In the same auction lot I got a Caligraph 2, which I sold locally to another collector.
Blickensderfer 5, 7 and 8.
Two months later, in May, there was another Breker Auction of the Rauen collection. This time I didn't go to Köln, but instead bid online on a lot with three Blickensderfers. The one that caught my eye was a very early Blickensderfer 5 (#2878). The hammer price was 300 euro, on top of which I had to pay 85 euro commission costs and 100 euro for packaging and shipment. The three typewriters arrived fast and in good order, so I think it was a pretty good deal. I sold the Blickensderfer 8 and 7 to a befriended collector, and only kept the early Blickensderfer 5. I'll probably write a separate blogpost about this machine in the future.
Wagner Underwood 1

In June I saw a Wagner Underwood 1 in a local online advertisement. I have owned several Wagner-Underwoods before. My theory is that these very old typewriters were shipped from the USA to the Netherlands right after the war (in the late 1940's) when there was a lack of typewriters here. I have found several Wagner-Underwoods here with dealer stickers from after the war, meaning that they were sold and used up to 60 or 70 years after being manufactured.
This particular Wagner Underwood 1 looked odd to me. The frame below the space bar was different from normal Wagner Underwoods. So I quickly made a deal and drove two hours straight to get the machine. I paid 50 euros and hoped to see a very early serial number. Maybe it was some kind of prototype? When I wiped off the dust to read the serial number, my hearth skipped a beat: #122. Oh my. I texted some fellow collectors about this Major Find and - over the moon - drove back home. Once home I gave it a proper inspection and found out I missed a digit under the dust; the serial wasn't #122, but #5122. The weirdest part about this story is that exactly the same happened to me 10 years ago with an Underwood 5.

Oliver 8
One of the most beautiful antique typewriters is the Oliver. In the past I had a very early Oliver 3, an Oliver 15 with a crazy large carriage and a quite rare Oliver Monopol Stolzenberg (3). I will definitely once own an Oliver 1 (yeah, dream on) or early 2, but till that time I figured I could buy a more accessible model. In December, I found an online advertisement for an Oliver 8. In case you don't know, this is the very rare export version of the Oliver 7. The ad was online for over two months and the typewriter still wasn't sold. Maybe because the seller asked 275 euros. I negotiated it down to 175 and drove to a village near Rotterdam to get it. 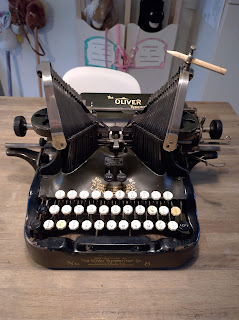 It was in decent shape, but I had to repair the mainspring. It was - fortunately - an easy and satisfying fix. I cleaned it and now it works like a charm. According to Oliver specialist Jett Morton, only 800 were made, and only 10 surviving specimens are known nowadays. It's a nice and pretty machine, in good condition and quite rare. What makes it even cooler is that it has a dealer sticker of F.W. Salomons, in Amsterdam. Here is a picture from 1913 of his office at the time. The second gentleman on the left is writing on an Oliver. Another machine is hidden away. On the window you can see the Oliver brand name.
It seems I am all back into typewriters again. I really enjoyed searching for rare machines and trying to find info about them. This has been a good collecting year, with a Perfected Typewriter No. 2, a Wagner Underwood 1, an Adler 9, an early Blickensderfer 5 and an Oliver 8. Which one did you like most? Have a happy new year!
Gepost door schrijfmachine op 00:33:00

This was really an exciting year you had! I would be most curious about the Adler 9, as I have never had a chance to look into it. Wishing you another great year in 2023.

Thanks Richard, the same to you!

Congrats on quite the typewriter expansion in '22!

That Underwood I think I spotted on MP - the nickelled ruler caught my attention when it got listed. Very glad it got recognised and hasn't ended up as an art-project or 'upcycled' into a lamp-stand!

Definitely the favorite, that one - precursor of the classic archetype.

Here up North also had a lucky find in '22 of a Standard Folding - not in the same league as the Adler 9 or Underwood 1, but my rarest find yet :)

Thanks! I have never seen a Standard Folding in the Netherlands. Great find, congrats. The wrinckle paint expands the history of the object, but it is not very pretty ;)